The realization of the entire Vondelpark area started in 1864 and was completed in 1878. In conjunction with the expansion of the City of Amsterdam a plan was designed by landscape architect Zocher to realize a Park outside the city wall near the city centre. 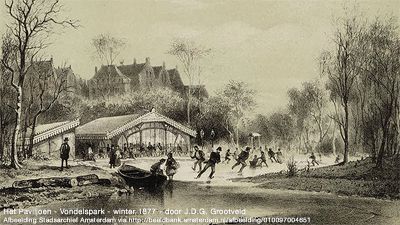 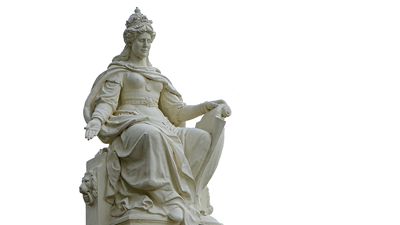 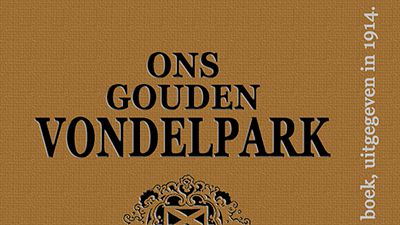 The realization of the Vondelpark

Christiaan Pieter van Eeghen (1816-1889), owner of the trading house “Van Eeghen & Co” was the driving force behind the Park Plan, which arose in late 1863, along with other notables of the City of Amsterdam and the contracted landscape architects Jan David Zocher (1791-1870) and his son Louis Paul (1820-1915). Opportunities were discussed and a grand plan was designed in a short time that would get support of influential residents of the city of Amsterdam. According to the English model they wanted to create an urban Park, without needing the help of the government and financed by individuals of the residents of Amsterdam.

Establishing an Association To Build a Park

Mr. C. P. van Eeghen opted for a broad-based approach, and there arose a first official meeting on January 6, 1864, from the Park Commission, formed by 34 dignitaries, at the City Hall of Amsterdam, chaired by Mayor J. Messchert van Vollenhoven. The Committee discussed the preparation of an association to realize the establishment of an association named “Vereniging tot aanleg van een rij- en wandelpark te Amsterdam” (Association to establish a Park in Amsterdam for coaches and to walk around). The first circular was distributed on January 12, 1864, in Amsterdam and expressed the importance of a Park outside the ramparts of Amsterdam in the vicinity of the Leidsche Bosch. They also included the estimated costs and invited people to donate a gift for the realization of the Park Plan. The Letter of January 12, 1864, was the first official announcement of the Park Commission signed by 34 dignitaries who intended to realize the Park and they asked financial support of the residents of Amsterdam; 4,000 circulars were distributed. On April 8, 1864 the association was founded with the name “Vereeniging tot aanleg van een rij- en wandelpark te Amsterdam”, and thereby established the statutes. On April 14, 1864, the association became a legal entity.

The whole park was built in four phases within a period of 14 years, starting on May 18, 1864, and the Board had the honor to announce the opening of the first part of the New Park on June 15, 1865, to the public. A Park Superintendent house was designed by J. D. Zocher and built in 1865 in the Park along the entrance gate Stadhouderskade and a pumping station near the street Kattenlaan was built in 1876-1877 and designed by W. Hamer jr. With an ad in the North Holland Courant TIME (DE TIJD), the opening was announced accompanied by the Rules of 5 articles for visitors. After the completion of this first part, explanation as to revenue and expenditure, and asked the board to all residents to give her confidence again and donate a gift for the construction of the other part of the park.

October 17th at 7 pm, a concert was given in the Park, led by conductor J. J. H. Verhulst, and with the cooperation of the Singing Society and other mucisians to celebrate the placement of the statue of the Dutch poet and playwright Joost van den Vondel (1587-1679). On October 18, 1867, the great statue of Joost van den Vondel was officially unveiled. It was designed by Louis Royer and finished by J.T. Stracké. The pedestal of the statue was designed by the architect P. J. H. Cuypers who designed also the Vondelkerk (church 1872-1880) and the Rijksmuseum (1876-1885).

The following enhancements of the Park were in the width of the area, first in the north, then south, and finally a major extension in the direction of the Willemspark and the Amstelveenseweg. The park was at that time called Vondelspark and was accessible from the Amstelveenseweg. In the period 1873-1874 a romantic cast iron bandstand was built, designed by L. P. Zocher and a small farm was built where milk could be bought. This farm has been turned into a restaurant and is now called Groot Melkhuis. The first small bridge near the Vondelstraat was build in 1869 and replaced in 1889 by a bigger iron cast bridge called Ulmus bridge (Iepenbrug). In conjunction with the completion of the park, two other bridges were build in 1879, designed by architect W. Hamer jr. and now called the Fire bridge (Brandbrug) and the Ilex bridge (Hulstbrug). The board of the Park decided to replace an old wooden restaurant by a brick pavilion in 1876. It was designed by architect W. Hamer jr. and the new Pavilion Vondelpark was opened on May 4, 1881, (the current pavilion is named VondelCS and includes a restaurant/bar). In the meantime the name of the Park was shortened from Vondelspark into VONDELPARK.

Statue of the Urban Virgin of Amsterdam 1883

In relation to the World Exhibition 1883 at Museum Square, the board decided also to make a stately entrance gate to the Park along the Stadhouderskade. Boardmember C. Becker approached Alexander Linnemann (a German architect, glass painter and artist) to design a new fence, a monumental wrought iron fence, including an inviting and large statue of the Urban Virgin of Amsterdam, sitting high in the middle of the gateway. The statue was executed by his fellow artist Friedrich Schierholz.

Until about 1900, the park was build for walking and coaches actually for the more affluent population of Amsterdam. The park was open to the public, but poorly dressed citizens, servants, stray dog carts and horses were kept out by the supervisors. Workers did not have the time or interest to go walking in the park. After 1900 this changed gradually, partly due to the natural attraction of the park and the new means of transport: the bicycle.
Mr. Eli Heimans and Jac. P. Thijsse wrote a special book with the title In het Vondelpark and they made an exceptional contribution to the accessibility of the park with the aim that more people were enjoying nature in the park. You could meet people in the park and also become acquainted with trees and birds. The first Rosery was build in 1936 by Jello Jongsma and in the garden was an anniversary bench placed and unveiled April 14, 1939, to commemorate the founders of the Park. The Rosery was redesigned in 1958 by Egbert Mos and is still excisting.

New bridges and points of attention until 1956

In continuation of the Van Baerlestreet the Vondelbridge was opened in 1947 and near the modern design of the Blue Thea House (’t Blauwe Theehuis), designed by the architects H. A. J. Baanders and J. Baanders (1937), another small blue painted bridge was build in 1956. Around the year 1935 a new small restaurant along the Amstelveenseweg was opened and is now called Vondel garden (Vondeltuin).
© 2013-2021 · Hans Homburg · 31-12-2020 19:21   Site-overzicht | Privacyverklaring
Follow @InhetVondelpark Tweet